On the Importance of UX in Decentralized Applications

Have you heard of Mastodon? It’s a decentralized and open source twitter-like platform using open standards such as ActivityPub to function. Among many other features, it has no ads and a chronological order feed. In short, it’s awesome.

Admittedly, looking at current implementations, this whole federation thing is confusing for the average user. I can tell someone I’m on Mastodon. The next question I have to answer is “which one?“. I can tell them that I’m on mastodon.social, but that gets confusing.

– “That’s the Mastodon right”? The one with lots of users.”
– “No, that’s just one that I’ve picked, there’s no main Mastodon”.
– “Wat?”
– “You can be on your own Mastodon, like piero.social and I can be on anotherplatform.com. But we can all communicate together, like Gmail and Yahoo for e-mail”.
– “I thought this was a Twitter-like platform. Why is it like e-mail?”
*sigh*

There are benefits to decentralization. But as long as the user experience is inferior (and it is) to that of centralized designs, adoption will lack. This is not a negative critique, it’s an observation about what needs to be improved. I feel as a lot of work has been placed on developing the backend and the UI of these beautiful systems. Not as much time has been spent on UX. 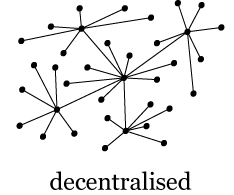 Design with users in mind, be forgiving and acknowledge their preconceptions about how computer systems work. Don’t disrupt, gently lead.

Here’s a few more concrete suggestions, specifically in regard for the current design of the Mastodon experience:

I love the project and will continue to follow it closely (heck, I might create some pull requests to fix some of these points). But until my wife can sign-up easily and understand the platform, I’m not sure I will put the effort to actively post content on it. I also get that decentralization is playing with “new ways” of designing social media, so existing patterns that have worked in centralized design might not directly apply. But remember that new often disrupts, and that holding your users by the hand, slowly helping them to understand new patterns is going to be key to successfully transition to a new exciting decentralized web.

RSS feed for comments on this post. TrackBack URI

Sorry, the comment form is closed at this time.